Last month, according to a  WGRZ News report, Buffalo Business First reported that Buffalo has the third worse unemployment drop compared to all other cities in America.

Buffalo Job Finder has many many jobs available for anyone who is interested in working or changing a current job.  Click the link below to see the entire list of jobs available with the opportunity for you to input information and customize your job search. 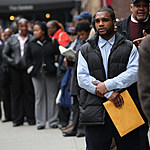